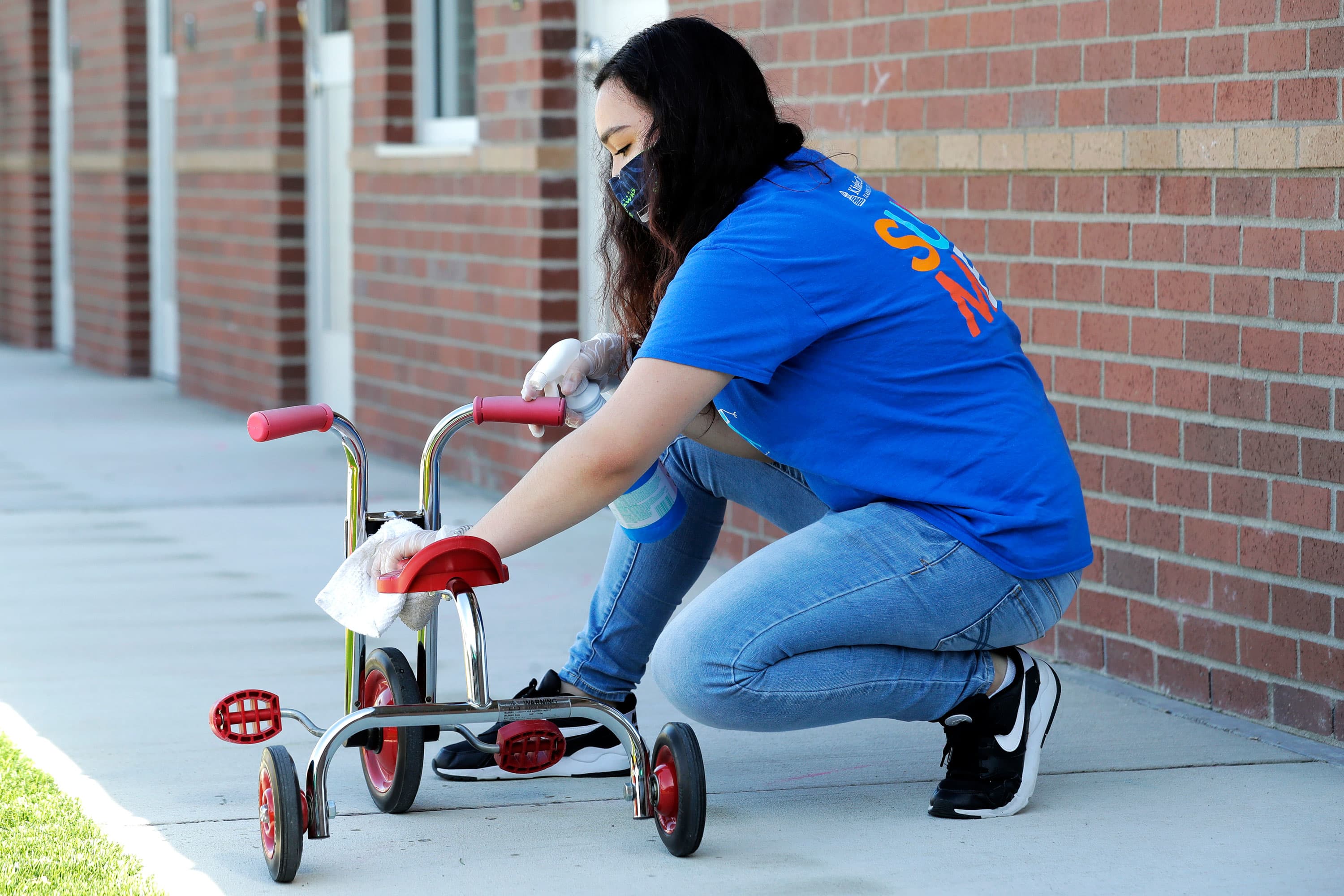 In this May 27, 2020 file photo, a worker at a daycare center in Tacoma, Wash., wears a mask as she cleans a tricycle following use by a class, a task that is repeated several times a day.

Twelve kids who likely caught Covid-19 at three child care centers in Utah went on to spread the virus elsewhere and infected some parents and siblings, according to a new study published Friday by the Centers for Disease Control and Prevention.

The authors of the study note that research had previously shown that kids 10 years and older could spread the virus in schools. The new study is evidence that even younger kids, including an 8-month-old baby, can still spread the virus, despite not getting severely sick from Covid-19, the researchers said.

The study looked at outbreaks that occurred in three child care centers in Salt Lake City, between April and July. Using contact tracing data collected at the time of the outbreaks, the researchers used the data to “retrospectively construct transmission chains” to determine precisely how the virus spread. A total of 83 kids attended the three child care centers included in the study, the researchers said.

Among the three outbreaks, the researchers said 12 kids were infected with Covid-19 at the child care centers, though three of them never developed symptoms and nine developed just mild symptoms. The study says those 12 kids came into contact with 46 people not associated with the child care facilities and appear to have infected 12, or more than a quarter, of them. Those infected by the kids include six mothers, one of whom was hospitalized, three siblings and three others, the study says.

“Transmission was observed from two of three children with confirmed, asymptomatic COVID-19,” the researchers wrote, providing more evidence that those who do not have Covid-19 symptoms can still spread the virus. “COVID-19 is less severe in children than it is in adults, but children can still play a role in transmission.”

The role that kids, especially asymptomatic children, play in spreading the virus has become a much-contested topic as the debate over whether and how to reopen schools for in-person learning continues. While the researchers focused specifically on child care settings and not necessarily schools, they recommended testing as a useful mitigation and research tool.

“Two of three asymptomatic children likely transmitted SARS-CoV-2 to their parents and possibly to their teachers,” they wrote. “Having SARS-CoV-2 testing available, timely results, and testing of contacts of patients in child care settings regardless of symptoms can help prevent transmission and provide a better understanding of the role played by children in transmission.”

The researchers noted a few limitations of their study. Between April 1 and July 10, Salt Lake County identified 17 child care centers with at least two confirmed Covid-19 cases within a 14-day period, but the study only includes data on three of those centers.

“Testing of contacts of laboratory-confirmed COVID-19 cases in child care settings, including children who might not have symptoms, could improve control of transmission from child care attendees to family members,” the researchers concluded.