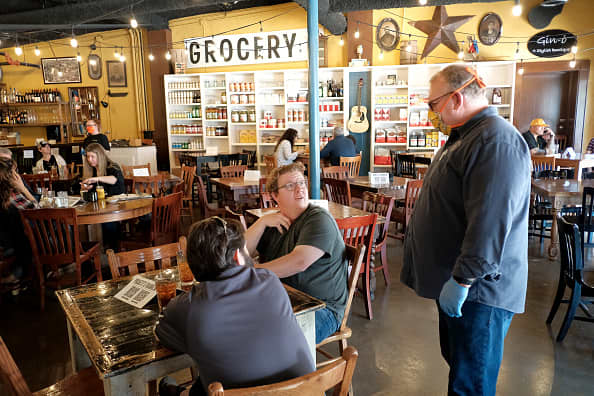 An employee wearing rubber gloves and a mask greets patrons at Puckett’s Grocery & Restaurant on April 27, 2020 in Franklin, Tennessee.

Nashville Mayor John Cooper announced on Thursday that he intends to curb the city’s next reopening phase after reporting a “slightly elevated” average in Covid-19 cases over the last two weeks.

“As of today, the majority of our public health metrics are satisfactory. But our 14-day new case average remains slightly elevated, prompting us to stay in Phase Two of our Roadmap for Reopening Nashville,” Cooper said in a press release.

Nashville’s local health department reported 6,627 total confirmed Covid-19 cases on Thursday, an increase of 56 cases since Wednesday. The department reported an additional death, bringing the total fatalities over the course of the pandemic to 80.

The Democratic mayor said a surge in Covid-19 cases in southeast Nashville “warrants further attention” and has directed the health department to focus its efforts in the region.

Dr. Alex Jahangir, the head of Nashville’s coronavirus task force, said nearly 50% of all new cases detected in the past month were found in southeast Nashville. The city will focus on offering more testing, contact tracing and education efforts in that area, Jahangir said.

The city is currently in phase two of its reopening plan, which allows restaurants and retail stores to operate at 75% capacity, but bars must remain closed. Community centers, golf course clubhouses, museums, Sportsplex and nature centers were allowed to reopen at 50% capacity, according to the city’s order.

Phase three reopening would allow for restaurants and retail stores to operate at full capacity and bars, clubs, karaoke bars, tours, live entertainment and “transportainment” businesses to operate at 50% capacity, according to the order.

Nashville might have to revert to an earlier phase in its reopening plan if it experiences continued outbreaks of Covid-19, the order warns.

Tennessee Gov. Bill Lee allowed restaurants and retailers to reopen in the state in late April with limitations. Gyms were able to open May 1 under state recommendations that include certain restrictions such as keeping pools, showers and locker rooms closed.

Personal care services such as barbershops and beauty salons are allowed to resume operations as are bowling alleys, arcades, dance classes and water sports.

The coronavirus has infected more than 27,900 people in the state and has killed at least 437, according to data from Johns Hopkins University.